Coming up in Philly music: A Curtis Summerfest variety show

The Imani Winds have spent the last 22 years developing a reputation for lively music-making, with a repertoire that combines specially commissioned work with classic works for the wind quintet. This is the first year they’ve joined the Curtis Summerfest faculty roster. For the final Summerfest faculty concert, they’ll be playing one of their most popular commissions. Kites, by the Cuban American composer Paquito D’Rivera, is a four-movement work that includes spoken words, jazz improvisations, and Afro-Cuban musical elements.

The rest of the program will be a varied, wide-ranging display of the talents concentrated in the Summerfest faculty. Organist Patrick Kreeger will provide a rousing start with a festive overture composed for a 19th-century European monarch that ends with God Save the King. He’ll be followed by a Baroque solo for unaccompanied bass played by Heather Miller Lardin, who’s become one of the key players in local Baroque groups like Tempesta di Mare and the Philadelphia Bach Collegium. She graduated from Curtis as a bass player, branched out into early music, and has added Baroque period instruments and proper Baroque style to her attainments.

Most of the Summerfest faculty are Curtis graduates and they are all musicians with thriving careers. Summerfest is an intensive educational program set up for two groups: young musicians with advanced training who are considering professional careers and mature amateurs and professionals who want to upgrade their skills. Curtis initiated Summerfest four years ago and its concerts have become one of the highlights of the Philadelphia summer.

Curtis Summerfest will present its final 2019 faculty recital on Thursday, August 1, at 8pm at Field Concert Hall, Curtis Institute of Music, 1726 Locust Street. Tickets are $20 and they’re available online and at the door.

If the Curtis Institute of Music isn’t careful, it may disturb Philadelphia’s self-satisfied parochialism even more than it has. Summerfest, Curtis’ summer camp, has proved how powerfully the city benefits from importing talent beyond the usual sources while folding it into the school’s own.

Of course, Curtis can have it both ways. Though some of the faculty performing Thursday night at the last in a new series of three Summerfest recitals were from orchestras elsewhere, most were, in a sense, of here – Curtis graduates.

You may not have caught Steven Copes as a student in the 1990s. Now, he is concertmaster of the St. Paul Chamber Orchestra, and, returning to Curtis, he was a knockout. Weston Sprott, a more recent Curtis grad, is a member of the Metropolitan Opera orchestra, and he brought an unlikely vocal souvenir back to Field Concert Hall – his own transcription of Ravel’s songs Don Quichotte à Dulcinée.

Transcription for what? With Charles Abramovic’s sensitive orchestra-invoking powers on piano, Sprott’s vibrato, phrasing, and ringing mellow tone were beautifully deployed – on trombone. With some difficulty, Ellen Dinwiddie Smith, third hornist of the Minnesota Orchestra, took on Beethoven’s Sonata for Horn and Piano, and the revelation here was the elegantly detailed phrasing of Patrick Kreeger, a grad of Curtis’ organ program, whose piano work suggested he has a lot to offer beyond the console at Fifth Avenue Presbyterian Church in New York.

This summer series – which, by the way, roundly killed the myth that there was no summer audience for classical in the city – has also been a crash course in the music of Curtis dean David Ludwig. Here, his work deepened the impression that stylistically he is hard to pin down. You might have put him in the melancholy-meditative-minimalist camp after hearing his score to Michael Almereyda’s urban-decay-chic-film take on Cymbeline. Last week at Curtis, Pale Blue Dot was a journey through cold space (dissonance) and humanity (traditional harmony). On Thursday, Swan Song evoked Ravel in the opening, explicitly quoted Schubert near the end, and raised the spirit of a particularly memorable heaving-sigh gesture in the Berg Violin Concerto (itself a swan song that quotes another composer). More than clever, Ludwig’s work raises its own tender message of spirituality. Copes was its ardent advocate, with pianist Amy J. Yang expert in its manifold demands.

Katherine Needleman, principal oboist of the Baltimore Symphony Orchestra and of a bright and slightly brittle tone, led three other Curtis alumni in the Mozart Quartet in F Major, K. 370.

The most distant export came from the pen of Shinuh Lee, a professor of composition at the College of Music of Seoul National University, whose Lament – O, the daughter of Zion! was full of tight, intelligent writing. Kreeger, again on piano, and flutist Mimi Stillman worked through its episodic treatment of angst and redemption. Sections like shattering glass were followed by shimmering hope, but ending in the depths as it did left you feeling that redemption or no, Lee wasn’t letting anyone off the hook too easily. 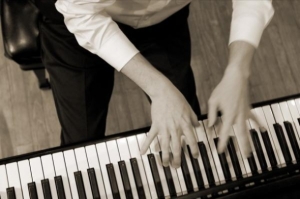 By Kim Grizzard
The Daily Reflector

After an impromptu performance and photo shoot, award-winning musician Patrick Kreeger settles down for an interview about his rigorous practice schedule and his recent appearance at Carnegie Hall. Minutes later, he makes a rather startling revelation.

“I’m going to have to leave,” he says, abruptly. The winner of the Bradshaw and Buono International Piano Competition, who will perform with the North Carolina Symphony next year, has to catch the school bus.

Such is the life of a celebrated teenage pianist. His musical career may have already hit what some would consider a high note, but for now, Patrick still has to focus on finishing high school.

“I still have a normal life,” said Patrick, 18, a senior at Arendell Parrott Academy. “I go out with friends, go to movies.”

In between, he teaches music theory, lectures on selecting effective repertoire for piano competitions and writes compositions for piano and orchestra. He also practices two to three hours a day (even longer before competitions) at East Carolina University’s School of Music, where he studies piano with Henry Doskey and organ with Colin Andrews.

“He is quite advanced for his age,” Doskey said. “He is already playing music of a difficulty level that we like to call ‘artist level,’ and he plays those pieces exceptionally well.”

“He is an exceptional student who, in addition to being quite talented, is very focused on what he would like to do in his life,” he said. “It is probably that focus and determination as much as his talent that prompted me to take him as a student.”

His work with Doskey dates to 2004, when Patrick moved with his parents to Greenville from Jacksonville, Fla. Though Patrick was only 14, he had been studying piano for more than a decade.

Wayne and Betsy Kreeger enrolled their son in music lessons when he was 3. In the early years of Suzuki piano instruction, the goal was to prepare their son for socialization, not the symphony.

“We started him in music not because of music,” Mrs. Kreeger said. “He’s a very quiet child. The (preschool) teachers were very concerned. That problem turned out to be a gift from God.”

Wayne Kreeger saw an ad in the newspaper for small-group Suzuki instruction 40 miles from their home. The Kreegers already owned a piano, but, since neither Betsy nor Wayne played, it was more for furniture than function.

“I think my true talent came from my grandmother (Eleanor Burge), who has been the church organist at her church for about 70 years,” Patrick said.

It didn’t take long for Patrick’s teacher to recognize his talent and to begin urging Mrs. Kreeger to find a teacher who was more suited to Patrick’s skill level. Though he was performing alongside children as old as 8, Patrick was already emerging as a standout.

“She told me about a year into it, ‘He needs to be with other teachers,'” Mrs. Kreeger recalled. “I said, ‘This was all about social skills; this was not about music. We want him to be with other kids.'”

Two more years passed before Mrs. Kreeger agreed to consider allowing her then 7-year-old son to study with a university professor.

Gerson Yessin, founding chairman of the music department at the University of North Florida, seldom spent his time with children whose feet dangled from the piano bench.

“His mother called me and told me about him and told me what pieces he was playing,” Yessin, who is retired, said in a telephone interview from his Florida home. “They were advanced pieces, the kinds of pieces I was teaching to college students.”

Yessin assigned Patrick to perform pieces that challenged his young abilities and attention span. Patrick had to go from a single sheet of “homework” from his Suzuki instructor to several pages of music to master each week from professor Yessin.

“He expected a lot. He demanded (that I ) learn this piece by next week. It was a lot of work for a young child,” Patrick said. “I had to buckle down and start doing two to three hours a day of practicing a day.”

Though Patrick was a prodigy, he still needed some polish. Yessin thought his young student had talent as far as technique, but he failed to find the feeling the music should convey.

“I tried to introduce feeling to him, louder and softer, faster and slower,” Yessin recalled. “After about maybe four years … he understood what I was trying to get him to do, and he would come back and play it with all the feeling and emotion and expression. He just blossomed, and he caught fire and became a first-class pianist.”

Although Patrick’s performance abilities were soaring, he began to develop a physical problem that threatened to snuff out his future as a pianist. He began to experience numbness in one arm whenever he sat down to play.

The condition grew worse, extending from his hand to his elbow and lasting for longer and longer periods. Doctors described as a nerve entrapment kept him from being able to play without pain.

“He would take Motrin before he would practice,” Mrs. Kreeger recalled. “Nothing the doctors did gave any relief.”

One day, Mrs. Kreeger heard loud music coming from the piano, though Patrick had been instructed to play softly to rest his arm. Patrick came running to his mother and announced that he had attached a contraption designed to help his father’s back pain to his arm and had played without a problem.

Though he did not continue to use the device, “from that day on, Patrick did not get numb,” Mrs. Kreeger said, adding she believes her son’s healing was nothing short of miraculous.

To protect his arms and fingers, Patrick long ago gave up contact sports.

“It’s not safe that I play football or basketball because if I jam something or break something, I’ll be out of competition for a long time,” he said.

Patrick, who has been participating in piano competitions since age 8, recently won the state and divisional titles in the Music Teachers National Association’s Yamaha Competition, where he was one of seven national finalists. He won the North Carolina Symphony High School Competition, which entitles him to perform with the symphony in April, and he took first at the Bradshaw and Buono International, which led to his performance before a sold-out crowd at Carnegie Hall.

“In the history, you’ve had Tchaikovsky walk the floor there and all the big composers have been there,” Patrick said. “Then you’re sitting up there yourself at such a young age, it is kind of overwhelming.”